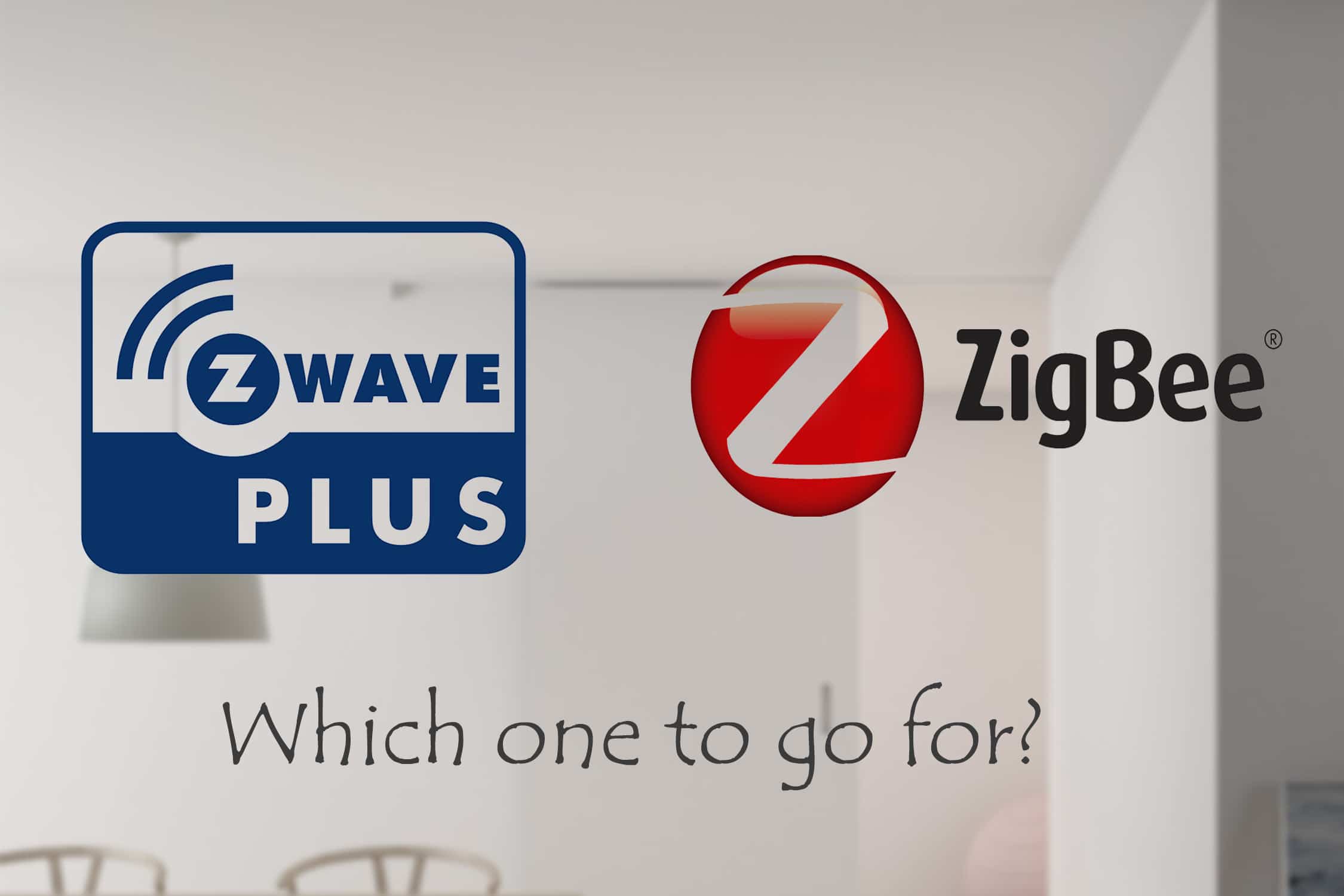 ZigBee has been in the home protocol business for a long time and has been on the top, as well. But, Sigma Designs’ newest creation, the Z-Wave, has quickly risen in ranks and now is on par with Zigbee. So, who wins in this Z Wave vs. ZigBee fight?

Now, both protocols have similar goals. They both connect all the appliances to themselves and lets you command them from the palm of your hands.

After a long day of work, everyone wants to lay back and chill. And with the help of these protocols, it has become much easier. Give the command from your electronic device (phone, laptop, tablet, etc.), and the appliances will start doing them for you before you get home.

Thus, prepping your house beforehand for your comfort. But of the two, which one is better? In our article, we have thoroughly analyzed and discussed all the con and perks of both the products. Hence, stay tuned and see us put an end to the topic of Zigbee vs. Z–Wave, once and for all!

Is It Necessary to Stick to a Single Communication Protocol?

Before we answer that question, it is necessary to know what is a communication protocol. A communications protocol allows you to transfer data, signals, or commands to two or several communicative systems to execute a form of physical work.

Now let us get back to the topic. Yes, it is possible to own two types of communications protocol systems at the same time. A good number of devices are accordant to both the Z-Wave and Zigbee, and the two devices don’t need to be connected internally for the protocols to do their work.

For example, Samsung’s SmartThings hub supports both the Z-Wave as well as the Zigbee protocols. Furthermore, more appliances like the GE appliances, Honey thermostats, and Yale smart locks perfectly link with both the Z-wave and Zigbee.

So, keeping two communication protocols will let you have a house that is smarter and more connected!

Most of us think the more, the merrier, right? Well, in this case, it might not be. It is not mandatory, but having two or more communications protocols, and using more than one can create some unwanted problems.

Firstly, an appliance is normally compatible with a single type of communication protocol. Hence, using two more might not be a good idea. Finally, each protocol has different intricate systems and functionalities. Using them together might interrupt with protocol’s signals and hence, hinders their functionality.

But if you plan properly, it is very easy to overcome the downsides!

Difference between Z-Wave and Zigbee

Though both the products have similar functionalities, they were created by different companies, and they have numerous differences. And in this section, we will thoroughly discuss all of them.

If you cannot rely on your smart home appliance or communication protocol, then they are of no use. Apart from being frustrating, not having a system that cannot relay signals to and fro from the protocols efficiently can be dangerous.

The Z-Wave has a range of 800 to 900-megahertz. And the Zigbee needs 2.4-gigahertz to operate simply means that with the Z-Wave, there is less chance of some corrupt signal can interrupt with it. Also, a Z-Wave mesh network ensures efficient and enhanced connectivity.

Therefore, it is safe to state that this round goes to Z-Wave. Even though we are no stating that the system for the Zigbee is less reliable, the Z-Wave protocol is safer and dependable when compared to Zigbee as they are implementing their own security standard S2.

For the success of a smart house appliance, they must be of high convenience. It is very annoying and inconvenient if you have to rely on numerous hubs to build a fully automated hub.

Let us start with Zigbee. The protocol is capable of commanding around 3500 home appliances and devices. But there is a problem with this.

A manufacturer can have its hardware Zigbee-certified without the software BEING compatible with Zigbee. Hence, allowing manufacturers to claim that the device is Zigbee-linked. So there is a big issue with Zigbee. Though it has been fixed in Zigbee 3.0

On the other hand, the sole owner of Z-Wave is Sigma Designs (Now owned By Silicon Labs). Due to the single ownership of the company, the Z-Wave device comes with a set of strict and safe standards. This means that Z-Wave compatible devices can be only be controlled by the Z-wave protocol.

Looks like Z-Wave bags another win and get one more step ahead of Zigbee. Still, Zigbee is faster than Z-Wave in data transfer.

Nowadays, smart homes are not limited to the dimensions of your house. They extend to as far as possible and can easily be used from your garage or lawn.

Z-Wave’s mesh network gives it an edge when it comes to range. Zigbee devices can detect signals from 40 feet away when you are inside the house, but the range outside falls drastically to 10 feet or under when you are outside the vicinity.

The reason for this is Zigbee uses very high frequency. And the problem with this is that though it increases its transmission as well as processing, it has a big impact on the range. Furthermore, due to very high frequencies, the waves are not able to pierce through heavy or thick walls.

On the other hand, Z-Wave sends signals using nodes and has a range of about 300 feet. Not only does this increase its processing, but it also reduces the chances of the signal being obstructed or interrupted by external means

And another win for the Z-Wave.

When it comes to power consumption, both the products, require less power than a wifi connection and become very beneficial as most smart home appliances use batteries.

But Zigbee comes victorious in this sector. The Zigbee uses exceptionally low power compared to Z-Wave. Therefore, Zigbee is a better choice if you want to install smart locks and devices of such sort.

The last and least is the cost!
Z-Wave tends to be a little cheaper when compared to Zigbee and hence, pulls the ball in its court entirely.

Similarities between Z-Wave and Zigbee

Here are the similarities between them.

Both products have the same functionality and goals. They both tend to make your life easier by reducing your physical effort as well as provide the security for your smart home.

Both the Zigbee and Z-Wave use mesh networking system. The advantage of using this is that there is no need to be directly connected to the main hub; there is no need for direct communication.

Z-Wave networks enable you to use up to 4 hops in between each device while Zigbee is practically limitless. Furthermore, Zigbee is capable of accommodating more devices when compared to Z-Wave. So Zigbee is a clear winner here!

Both the products use the AES 128 Standard, which is one of the safest forms of security protocols or software. None of the products ensure 100% safety as some devices are vulnerable to corrupt signals, but the AES128 plays a good role in ensuring good safety of your hardware and software.

Another draw amongst the two products.

In the past few years, technology advancement has reached a whole new level, and with it, the rate of cybercrimes has seen a steep rise as well. So, it is essential to get a device that cannot be compromised easily.

If it does, then your safety will go down with it and especially if your CCTV cameras, sensors, and all the locks of your home are connected with the device. In terms of security features, these two, Z-Wave and Zigbee, have the exact same AES 128 encryption standard installed within it.

This particular security system has a very low probability of getting hacked by intruders. We can trust it because it is widely used in banks and as well as in government quarters. With that being said, Z-Wave had created a lot of buzz by customers for not providing adequate safety.

The problem arose when companies ignored the utilization of the high-level encryption standard provided. Z-Wave took the hit regardless, and companies started to isolate it.

But they bounced back soon enough and improvised their rules and made sure all the Z-Wave devices are AES 128 certified, and without this, they would not be allowed for use. They didn’t end with their improvisation there; all the appliances also have to be Security (S2) framework certified.

On the other hand, Zigbee never faced such problems regarding their security. The safety features and protocols are more or less identical to that of Z-Wave. Therefore, both of them are quite trustworthy in terms of the security of your devices.

Luckily, both products come from renowned companies. The Zigbee accommodates around 400 companies, and this makes it compatible with almost 3500 devices.

Even though Z-Wave might not have the same variety of compatible products available. It does have products that are highly compatible with the Z-Wave. Hence, Sigma Designs have focused more on one quality of the compatible appliances than quantity. More than 700 companies with more than 3500 devices.

Device They Support with Their Name

Famous devices such as the Samsung SmartThings hub, Wink hub, GE appliance, Yale Smart Lock, Honeywell Thermostats, etc. are perfectly compatible with both the devices. One of the best ways to identify if a device is accordant with anyone the device is by checking their official logo.

When purchasing an appliance, there should be a Zigbee or a Z-Wave logo on the back of the box, manual, or something. This authenticates as well as lets the user know that they are capable of working with the smart home protocol that you are using.

Conclusion – Which One to Go for?

Before we give the conclusion, we want to clarify that the results that we have come up with are entirely personal. And that you can always differ.

That said, the Z-Wave is the obvious choice for us. It can do everything the Zigbee can but a bit better. Also, it has better functionality, range, and processing. And the best thing is that you can enjoy all these at the most affordable price.
But if the cost is not a matter and you want a fast, powerful device & a more renowned brand then Zigbee should be the choice.

We hope that our article has helped in clearing out the Z-Wave vs. Zigbee doubt and has given you a clear view of why we have chosen the Z-Wave as the better option. Thank you for your time!