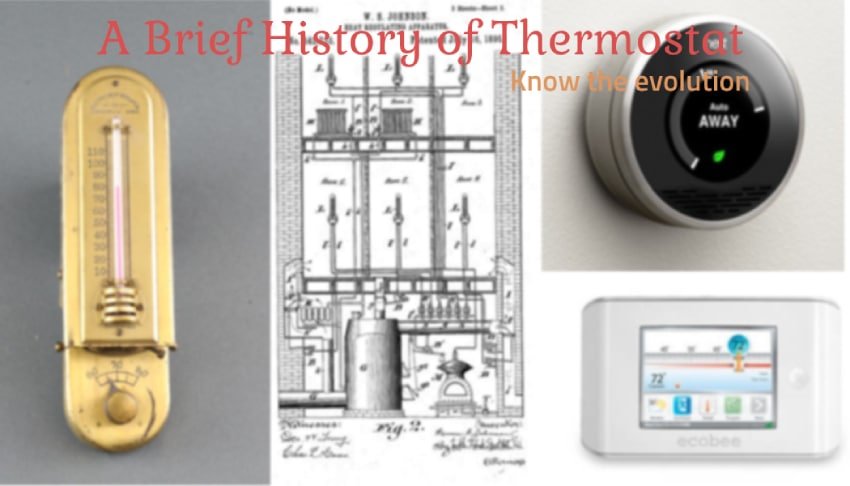 The thermostat is a common sight in most households. However, like all inventions that haven’t always been the case and the thermostat, in particular, has had a long history with many different iterations over the times.

While you might not see the entirety of history unfolding when you see a thermostat in your neighbor’s house, you might find it to be an interesting read to know how the modern thermostat came about and where and how it began.

The Innovation of the Thermostat – Cornelis Drebbel’s Mercury Thermostat

The need to automate a process has always been present in human history. People wanted a means to sense and control the temperature so that they could feel warm during the colder months and cool during the warmer months.

Although that is what a modern-day thermostat does, the rudimentary forms of thermostats had much smaller applications.

Such was the case for Cornelis Jacobszoon Drebbel’s mercury thermostat, which is the oldest known thermostat to have been made. Cornelis was a Dutch engineer and inventor, born in 1572, and died in 1633, who is most well known for being the builder of the first navigable submarine.

Alongside that great feat, Cornelis also made an oven whose temperature was controlled by a mercury thermostat. The thermostat would control the amount of the hot air entering the oven and, in turn, control the temperature of the oven. This was recorded to be in about 1620.

As you can see, the thermostat had very humble beginnings, and there was still a long way and many iterations left before it would be a common and essential part of most households.

Andrew Ure and Traces of the Modern Thermostat

While Cornelis’s thermostat was a thermostat in the most rudimentary of senses, it was Scottish physician Andrew Ure invented a much more proper form of the thermostat.

Andrew Ure was born in Glasgow in the year 1778 on the 18th of May. Ure was a genius of his time and was the founder of the Andersonian Institution, now known as the University of Strathclyde, a public research university in Glasgow of much renown.

Exposed to the terrible factory conditions of the 18th century, Andrew Ure tried to understand the principles of ventilation. Through this pursuit, he had come to invent the bi-metallic thermostat that could regulate a steam boiler’s temperature to a certain degree.

It did not see commercial success but paved the way for what would become the modern thermostat, and many scientists acknowledge Ure’s contribution to this field.

The origins of some inventions are often quite humorous and unexpected, as are the reasons that drove the inventor to invent the said device. Such was the case for Warren Johnson. You’ll find that even in modern times, you’ll relate to his plight.

Warren Johnson taught in a building heated by a furnace in the basement. It was often hard to get the temperature right, and to change the temperature, Johnson had to temporarily stop the class and go look for the janitor. He soon became so annoyed he thought of a solution to this problem.

He invented a bi-metal coiled thermostat that could sense the temperature and would sound an alarm for the janitor to open or close the heat damper.

And he called the device an “electric tele-thermoscope”. Johnson later founded the Johnson Electric Service Company that went on to manufacture and develop this thermostat.

The Damper Flapper and the First Programmable Thermostat

A short time later, Albert Butz came out with a temperature regulator device for ovens known as the damper flapper. This device could control the air intake of a furnace and raise or lower the temperature in conjunction with a thermostat.

Modern temperature control systems that are commonplace with thermostats have him to thank.

This invention was later bought by Mark Honeywell in 1906. Mark used the invention as a basis and developed the first programmable thermostat that allowed control over the temperature settings (although not as much as most modern thermostats).

And this was a turning point for the thermostat and later paved the way for more efficient and functional thermostats featuring an electric clock which forms the basic design for many thermostats even today.

The Evolution into Digital Thermostats

The first thermostats with digital displays emerged around the 1980s. They featured complex circuits and could be functioned to control the temperature for different days and months. After this, thermostats kept on improving in terms of functionality and use until the transition to smart thermostats.

Another form is digital radiator thermostats that are usually used in conjunction with a boiler. They can increase or decrease the flow of water which gets heated and this, in turn, can save you from wasting water.

What we now call the smart thermostat was first introduced in 2007 by a company known as Ecobee, whose name is widespread now.

Engineer Stuart Lombard came up with the idea of a thermostat that made use of WiFi connectivity to offer complete control of air conditioning systems in a house, along with better facilitation of information.

To say this was a revolution was putting it lightly. Smart thermostats were now being built by competitors of Ecobee and new models replacing old thermostats. Amidst this revolution was the Nest thermostat line, which featured sleek design and energy plans.

The WiFi feature of smart thermostats allowed you to control the temperature of a room from a different place via means of a mobile app. And the app effectively turned your mobile device into a remote control.

You could cool your room and unwind instantly from a long journey or turn off your air conditioners if you forgot to.

While programmable thermostats had existed beforehand, their complexity meant that people often did not bother to fully program them to be efficient. New smart thermostats circumvent this by making them self-programming.

These thermostats could download energy plans (usage data that recorded the energy costs and usage in a house) and adjust themselves to achieve greater efficiency. They are truly top of the line and a remarkable step up from their origins.

It would be wrong to not include the Nest learning thermostat in an article about the thermostat revolution due to how praised it is for its innovation. Tony Fadell, Ben Wilson, and Fred Bould worked together to design and bring this thermostat to fruition.

The Nest learning thermostat is a self-programming, electronic thermostat with WiFi features. This thermostat, true to its name, features learning capabilities where it can process reference data and adjust itself automatically to the temperature at different times of days or months.

And it can fully automate itself being able to learn and discern schedules and is alert to presence activating energy-saving mode. Nest has been made to be compatible with almost all HVAC systems and is now in its third generation of design, featuring more functionality and improved algorithms. The nest is truly an impressive device that shows what the future holds for thermostats.

Hopefully, this thermostat history article has proved interesting and given you an idea of the evolution of thermostat that how the modern thermostat has come about.

It has also given you an idea of what they are capable of in the future with developers like Nest Lab and Ecobee producing top of the line thermostats that can adapt to a person’s schedule and lifestyle.